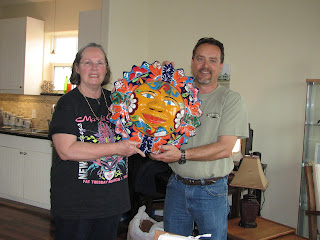 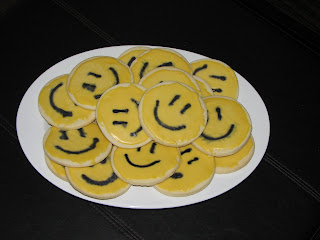 Members of Sunny Beach Neighborhood (SBN) met from 11 a.m. to about 1 p.m. on February 18, 2012, to elect new officers and discuss neighborhood issues. The meeting was hosted by Andrew Kazanas at 11220 Bernice Dr. The agenda was presented by Anne Billings, secretary.
In attendance were:


Thank you, Judy Shorman, who brought specially decorated cookies, cupcakes and smiley face gifts to celebrate Sunny Beach. Thank you, too, to Julia and Robert Lewis for delicious fresh fruit for our meeting; to Anne Billings for coffee and juice; and to Andrew Kazanas for letting us meet in his house.

Judy Shorman volunteered to serve as president and was elected with unanimous approval.


Anne presented Tom Empey with a painted sun face (just like the ones on our neighborhood sign) as a token of appreciation from the entire neighborhood for all he, Gerri and their family have done for Sunny Beach for more than a decade.

Anne Billings explained she had not published a new Sunny Beach directory in 2011 due to the great number of ownership changes. She handed out copies of a new chart of properties with phone and address information to those present. It was reviewed and edited by those present for accuracy (a pdf copy of this will be sent to everyone soon).


She reported the following new neighbors since the Spring 2011 SBN meeting:

Bank Account and Expenses
Bruce Billings reported a checking account balance of $1,119.66 as of 1/31/12, with two bills outstanding that total $172.51 (purchase of three sun faces $162.38 + photocopies for meeting $10.13). He indicated we needed to raise dues to meet expenses. Recurring expenses paid by SBN include $275 WGIPOA annual dues, $50 annual use fee for dune walkover east end of neighborhood (removed by Hurricane Ike but we are keeping); and $32.40 per month to have the lot with our neighborhood sign mowed. New expenses voted this meeting are: $500 to WGIPOA for ERP survey participation (see “West End Erosion Survey Participation” below) and $175–$200 for five security signs (see “Neighborhood Security” below).

West End Erosion Survey Participation
Bruce reported on a survey that the West Galveston Island Property Owners Assn. (WGIPOA) wants west end neighborhoods to help fund annually to provide data in determining erosion setbacks – that is independent to that of the Galveston Planning Commission for its Erosion Response Plan (ERP) required by the state. The WGIPOA estimates its survey costs at $20,000 annually and has asked property owner associations to contribute “a minimum of $1,000 or whatever you can appropriate.”

After discussion, it was proposed and passed that Sunny Beach Neighborhood vote each year whether to contribute to annual surveys and how much, and that this year we would contribute $500 toward the WGIPOA survey (Our contribution is from SBN’s account made up of dues. Individual property owners can make their own donation toward the survey if they like.)

Membership Dues
A proposal was made and passed that we increase our SBN membership dues to $50 per household annually. (Statements for dues at the new amount have been sent and are now due. Make payment to “Sunny Beach Neighborhood” c/o Bruce Billings, 7373 Blairview Dr., Dallas, TX 75230. Questions: contact Bruce at 469-232-0411 or thebilltender@tx.rr.com.)

Tribute to Empeys
A fund has been established to collect contributions toward purchasing a good size palm tree (or trees) and marker that will be a living tribute to the Empey family in Sunny Beach Neighborhood. Payments can be sent to Bruce along with neighborhood dues and will be set aside for future use.

Beach Bollards
Tom Empey reported that moving the bollards defining beach parking from in front of Sunny Beach properties to a position in front of undeveloped land to the west of 8 Mile Road has been requested, and that we should have an answer “within the next month.”

Neighborhood Security
 Andrew Kazanas related his frustration at being the most recent victim of a break-in/burglary at the house we were meeting in. Besides TVs, the robbers stole three chairs, including a large recliner from the third floor.

 Judy Shorman reported that Mark Miller has installed a security camera on the house at 11226 Garfield Way that will be able to capture images of traffic on 8 Mile Road. She stressed the importance of communication and knowing our fellow neighbors. If anyone looks “out of place,” please communicate immediately with the property owner in question and/or with the Galveston police.

 Anne Billings relayed a suggestion by Ron Binkley that we add some sort of physical barrier, such as a fence, along the east side of 8 Mile Road to define and secure our neighborhood. Following discussion of the costs and difficulties of implementing this, it was proposed and passed that we purchase five small signs that say the neighborhood is under surveillance with SBN funds (est. cost approx. $35 each) and add them to each street entrance. Judy Shorman volunteered to have the signs made, and Tom Empey volunteered to install them.


Judy Shorman, Mark Miller and Ron Binkley, in addition to securing City of Galveston cooperation, paid for and had constructed a sand fence in front of properties fronting the beach. The entire neighborhood will benefit from dune growth and the added security this will provide.

Neighborhood Sign
Gerri Empey reported that the corner lot on which our sign stands had changed ownership, but that we had the new owner’s approval to keep the sign on it.


The Billings purchased two more pottery sun faces (these are brightly painted) to replace the ones stolen from our neighborhood sign. Tom Empey volunteered to put them on the sign. (He did this the next day with the assistance of Kathe Giebelhaus – both of whom were cheered on by the Billings.)

Bruce Billings reported it would cost about $500 per light to purchase the type of powerful solar lighting used commercially. After discussion about possible annoyance at night of strong light on the sign to nearby houses vs. creating better neighborhood identity and enhancement of property values, we agreed to table the matter of lighting our sign until it is determined whether the flashing light on FM 3005 will be brought back (Gerri volunteered to investigate more on this).


Sewers and Streets
The City’s plans to put in a sewer system and pave streets at Sunny Beach are for 2013. Homes on septic systems will not be required to connect to the new system unless or until there is a problem with their system.

Permit to Rake Seaweed on Beach
We decided not to have the seaweed raked at Sunny Beach. Discussion concerned how seaweed helps to build the dune as well as provides some deterrent to beach crowds.

Final Hurricane Ike Repairs
Two houses – one at 11224 Garfield Way and the other at 11214 Schwartz – remain boarded up and seemingly abandoned since Ike. A letter written on behalf of our neighborhood by Terry Burkett to Lam Nguyen concerning the Garfield Way house was read and approved with minor changes (the letter already has generated response from Lam, who says repairs will be made soon). There is some doubt as to who actually owns the Schwartz property. This was discussed with no action taken.

The Sunny Beach Blog
Tom Empey reminded us that we have an Internet blog for posting neighborhood news, photos, comments, etc. (go to http://sunnybeachneighborhood.blogspot.com). He would like to turn maintenance of the blog over to someone else. Please contact Tom about helping with this at 409-789-2297 or tempey@comcast.net.

March 8 Meeting on ERP
An extremely important Galveston City Council meeting to review and possibly approve of the proposed beach Erosion Response Plan (ERP) is March 8, at 4 p.m. at City Hall on 25th street. If the ERP proceeds as is, it could mean half of Sunny Beach is not protected. Houses on both sides of Bernice Dr. would potentially not be allowed repairs or construction.

Members representing WGIPOA plan to meet with the mayor and City Council members prior to the City Council meeting to advise of the possible impact the ERP could have on property values and to request that the City to drop from the ERP the following:
• No setbacks
• Platted properties are exempt
• Perform a ground survey each year in May with the payment coming from the 4B sales tax
• Establish the line of vegetation from the 200 MLT point
• Encourage building a continuous dune system
• Update the ERP every 5 years using ground surveys

Our new president, Judy Shorman, is unable to be in Galveston on March 8. Julia Lewis plans to attend and will speak on our behalf. Tom Empey also plans to attend. Please try to be at this meeting for our neighborhood if you can.

Our next SBN meeting
Our next meeting will be in April or May, a date to be announced. If you have something you would like to put on the meeting agenda, please e-mail to Judy at shormanj@aol.com or to Anne at adavisbillings@tx.rr.com.

Sunny Beach Neighborhood is an unincorporated nonprofit organization established to enhance the common interests of Sunny Beach. Participation is completely voluntary. Your support with dues and with taking an active part in our neighborhood is important; please be involved!
Posted by Gerri at 3:41 PM No comments: